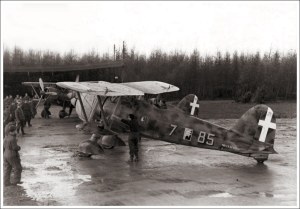 “11/11/40  Lowestoft, Suffolk. 1430 hrs.  CR.42 marked 85-16, 85 Squadriglia, 18 Gruppo, 56 Stormo, Sergente A.Lazzari.  The Gruppo shield is identical to that carried by 13-95 in the previous report.  Mission start details are the same as for the preceding report.  When flying at about 16,000 ft escorting the bombers, the pilot saw some Hurricanes taking off and felt that he had not much chance.  He dived to 13,000 ft and was attacked by 3 Hurricanes, he shot at one and saw it dive down suddenly and thought that it must have crashed into the sea.  The dogfight with the other two continued and for some time he held his own because he says, although the Hurricanes were infinitely faster, he could turn much more easily and was able to out-manouever and evade them so that they were never able to get on his tail.  He thought that the most dangerous period would be on the return journey when the Hurricanes would have been able to have come up from behind by reason of their greater speed.  His engine started to vibrate violently which he thought was not due to any damage but because the variable pitch gear of the propeller had jammed, leaving one of the three blades at a different pitch to the rest.  Realising that he could not get home he came down to look for a landing ground.  He touched down in one field, and ran over a railway line which caused the aircraft to crash into the next field.  The pilot himself was unhurt.  The pilot says the Squadriglia left Turin, Mirafiore aerodrome on 6 October, reaching Munich the same day.  The next day they took off again and landed at Frankfurt, proceeding the same day to Brussels.  In the early part of the war, this Squadriglia took part in an action over Toulon and was later based at Turin where this pilot had operated as a nightfighter against our bombers.  This pilot has been in the Italian Air Force for 4 years, after 40 hours flying he went to an aerobatic training school, he has done a total of 500 hrs.  His morale is quite good although at the beginning of this operation he realised he was up against a stiff proposition, he did not funk it.  He has previously been decorated for valour.”

The aircraft was then subject to a technical examination on site and the following report was written.

The Royal Aircraft Establishment at Farnborough produced Reports in February 1941 after it had carried out an examination of the aircraft. They were:-

Also examined at this time was an aircraft of 95 Squadriglia 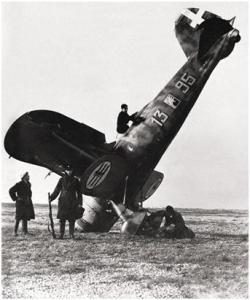 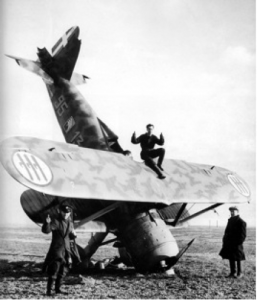 On the 11th November 1940 a Fiat CR-42 was brought down near Orfordness , the pilot was captured and interrogated.

11/11/40  Orfordness, Suffolk. 1345 hrs.  CR.42 marked 13-95, 95 Squadriglia, 18 Gruppo, 56 Stormo, Sergente P.Salvadori.  The shield for the Squadriglia was the claw of an eagle and the Group shield an axe with three arrows diagonally enclosed in a vertical rectangle.  The mission was an escort mission for 10 Fiat BR.20 bombers started at about 1200 hrs.  The whole of the 95 Squadriglia with 85 Squadriglia are based at Aiechloo (sp?) making 24 CR.42’s with 3 reserve aircraft and pilots to each Squadriglia.  22 of these aircraft started on the operation and set a course at 316 degrees climbing to 18,000 ft.  Before the combat commenced this aircraft broke an oil pipe and fell behind.  The engine got hot, forcing him to land on the beach, nosing over gently but he was nevertheless, extremely proud of his landing.  Just after landing he was rather worried as a Hurricane came and had a look at him but in response to his frantic wavings, waved back and went away.  The pilot of this aircraft is a reservist, he had previously done a certain amount of glider flying with a youth organisation and was called up in the middle of 1938 for his 18 months military service which he did with the Italian Air Force.  He spent about 12 months at training schools and completed 100 hrs flying at the end of which he was sent to his squadron.  Since then he has flown a further 100 hrs.  About 6 weeks ago his squadron was ordered to pack up and instead of going to Africa as they thought, it was sent to Munich where they stayed for 10 days owing to bad weather.  After this they moved to Aiechloo(sp?) where they have been ever since.  Further interrogation will be carried out.  His morale is very poor, does not want to fight and  really glad to be out of the war.  Very dissatisfied with his officers, loathed the climate in Belgium and can’t stand the food or the Germans.

The Royal Aircraft Establishment at Farnborough produced Reports in February 1941 after it had carried out an examination of the aircraft. They were:-

Within the report was the comment:- “The aeroplane will be flight tested as soon as the necessary repairs are completed.

Coded ’95-13′, this aircraft belonged to the 95 Squadriglia Caccia Terrestre (of the 18 Gruppo, 56 Stormo), the Squadriglia being indicated by the ’95’ in the code of the aircraft. This unit was attached to the Corpo Aereo Italiano (Italian Air Corps), which was the overall title of the Regia Aeronautica units, under the command of the Luftwaffe’s Luftflotte 2. Arriving in Belgium in October 1940 it took part in the Battle of Britain. It was based at Maldegen in Belgium and was shot down by RAF Hurricanes from Martlesham Heath, force landing near Orfordness with a fractured oil-pipe but otherwise undamaged.

It was taken by road to Martlesham Heath and then, on 27th November, to Farnborough. The CR-42 was subsequently allotted the RAF serial BT474. S/Ldr L.D. Wilson made only limited flights at RAE before W/Cdr I.R.Campbell-Orde flew it to the AFDU at Duxford on 28th April 1941, to enable that unit to develop tactics against the type, which was the standard Italian fighter in use in the Middle East theatre. During 1943 the AFDU lost interest in the type because of its obsolescence and the aircraft was selected as potential museum material. In 1979 the CR.42 was transferred to Hendon 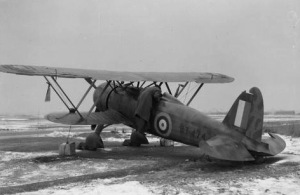 The Fighter Collection’s Fiat CR-42 is undergoing final restoration to flight. Both of the above aircraft have provided much additional information to aid the restoration in a physical sense, with the assistance of the Royal Air Force Museum and in the reports, which were generated by the investigations at the RAE Farnborough during the war.

The accident occurred whilst flying in divisional unit on a co-operative exercise with the air control organisation [ground based look-outs which reported aircraft seen] in the defence area, the aircraft collided with the ground. Since 1./F 9 was acting as a detached unit the permission of the [F9] wing commander for the exercise was not needed. The normal commander of 1./F9 was sick, the next commander in line followed the exercise in the Gallivare area, the division was lead by acting divisional commander. Take off occurred at 09.00 with 7 aircraft with FV 2542 as the fourth aircraft. The exercise was designed that the unit should fly in a V formation at 1500m height on the way out, towards Paittasjarvis, through Arosjokk camp and thereafter on a course 30 degrees. When the mountain peak had been passed they should take a course on 90 degrees, fly across Majaure to Kiruna.

The ravine they flew through was not narrow and had also soft and even lines. Flight height was between 10 and 15 meters. No sun was visible and no shadows were seen, making it difficult to judge your height, especially as the mountain has faded out against the horizon. Pilot Einar Theler in aircraft no. 5 in the division [participated in the Finnish Winter War in the F 19 fighter division] saw after flying a few kilometres up through the ravine a small cloud of snow, and then a larger one. He understood that an accident had occurred and broke off the exercise, circling the place of the accident. He could not see any movement on the ground so he contacted the air monitoring central in Gallivare, asking for permission to land at the place of accident. This was not granted, so he returned to Kiruna to deliver an oral report. There after he was granted permission to take a Hawker Hart aircraft, together with a ground personnel and fly to the place of accident. They landed and recovered the pilot who they found dead in the cockpit, still strapped in the seat.

The aircraft had first struck the ground with both skis approximately at the same time, thereafter it bounced with a high tail forward. The propeller made contact during this movement shown by corkscrew like imprints in the snow. Thereafter the aircraft struck the ground at approximately 45 degrees angle, with the propeller first. At the impact the engine was forced into the fuselage slightly twisted while engine cover plates were thrown clear to the sides. The aircraft thereafter probably continued on the path of the flight, tail first. The aircraft has thereafter been laying on the back totally wrecked in 30 degrees off the direction of the flight. The pilot died immediately at the crash. The pilot of the 6th aircraft in the unit also saw the crash. After seeing that the pilot of aircraft no. 5 circled the crash site he broke off the exercise and returned to Kiruna to report the incident. Since the crew of the Hart aircraft recovered the body, the air ambulance requested from F 4 Boden could be returned empty.

The cause of the crash was that the pilot misjudged the height, so the aircraft was flown into the ground. The mistake originated because of the difficulties in the current daylight to judge the height in a snow covered mountainous terrain. It can be questioned that the exercise ought to have been conducted at a safer height bearing in mind the dangers always present when flying low over a snow covered terrain. 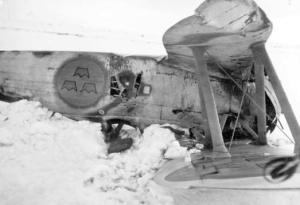